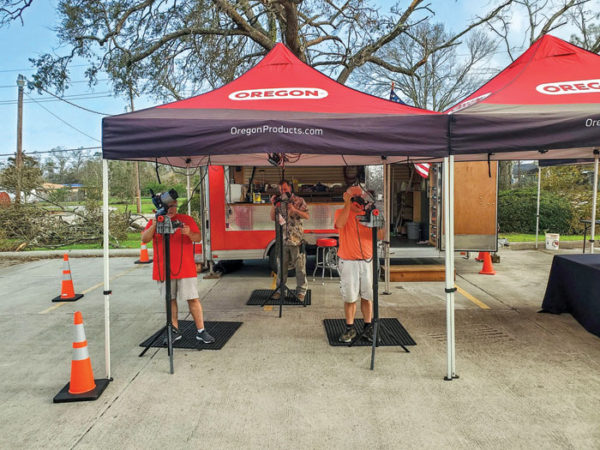 Dealers in Iowa are still trying to recover from the epic and rare “derecho” wind storm that hammered much of the state and Midwest on August 10 as the rare confluence of thunderstorms across a broad straight line front led to sustained 70-110 MPH winds in the disaster zone. Video of the storm hitting Cedar Rapids looks just like a powerful hurricane hitting Florida.

At major construction equipment dealer Capital City Equipment in Des Moines, Brian Jansen, Operations Manager, says, “Our rental division was inundated. We were having an above average year for rentals, without the storm, we still would have finished all right. But, I will tell you, from when it happened till now, it looks to me like 90% of our rentals are out on rent.” He adds that includes all the company’s light towers and generators as well.

Jansen notes that the dealership was out of power 48 hours. “Even longer for the internet to be back up. In today’s age, it’s hard to operate a company without any internet.”

He adds that one of the biggest impacts— that U.S. consumers may see in the near future—is the crop losses. There is no corn left to speak of,” he says. “There is no recovery for the corn. That’s a loss for this year.”

He notes that there are always mixed feelings when a disaster benefits business revenues because people are truly inconvenienced and hurting, but the dealership is “Having a better-than-last year year for sure.”

Early on August 27, Laura made landfall near peak intensity at Cameron, La. The storm was the tenth-strongest U.S. hurricane to make landfall by windspeed on record. The storm caused the deaths of at least 36 people in the U.S. (71 overall) and inflicted an estimated $10 billion in damages along the Louisiana-Texas border near the Gulf of Mexico and northward. The Oregon Disaster Relief Team and Smiths South Central group were in Lake Charles three days after the storm hit and worked there until mid-September. According to Smiths South Central Sales Co. President Robert Smith, the high winds at the company office in far north Louisiana were nothing compared to what hit the communities in the southwest part of the state. “The storm was pretty intense, and the damage in the Lake Charles area is some the worst I’ve ever seen, and we’ve worked around these storms for years.”

Smith notes that such an effort makes for “hard work and long days” and his company is fortunate to work with such proactive suppliers. The group sharpened 200+ saws a day—more than 2,000 easily—during their time in Lake Charles. Team members made minor repairs as well. “They also made sure to spend time to tell people to use their saws safely and to be cautious,” Smith says.

Severe August thunderstorms ignited numerous wildfires, fueled by dry land, across California, Oregon and Washington that were then fanned by strong, gusty winds. Many of the initial wildfires exploded and formed “megafires” that broke records burning more than 6.6 million acres. Most fires have raged into late September, though cooler weather and rain showers in early October will hopefully bring relief. At least 37 people have died as a result of the fires.

With Portland as headquarters, and Oregon as its namesake, power equipment company Oregon posted on Facebook that the fires hit home. “We keep the firefighters, affected communities and families, and our local employees in our thoughts,” a post reads. As an action item, an Oregon disaster relief trailer was set-up at Clackamas Community College to support Oregon state firefighters as the battle against the state-wide fires continues. The team is assisting with general maintenance and minor tune-ups, to cleaning air filters and bar grooves, and drive sprocket replacement.

Just a few weeks after Hurricane Laura, the Gulf Coast, this time the Alabama and Florida side, braced for Hurricane Sally, who washed ashore near the Florida- Alabama line with winds reaching 105 MPH and forecasters measuring rain in feet not inches across the Deep South. Sally was a very destructive Category 2 Atlantic hurricane, and the first to make landfall in Alabama since Ivan in 2004.

Seville Power Equipment in Pensacola, Fla., located just over 30 miles from where the eye made landfall in Alabama, manager Maggie Crawford says that while those living on the Coast are used to storms, what was tricky about Sally was her intensity: “It caught a lot of people off guard. We didn’t think the eye would hit us.” Seville’s power was restored rather quickly, but internet took longer. Crawford says she hasn’t gotten a shipment of parts from UPS in a week, though she’s got manufacturers saying they’ve been sent.

Generators are flying off the shelves at Seville, but Crawford says it’ll be closer to a month before she has any saws available. She reiterates that while the shop has stayed consistently crazy busy, storms like Sally are just part of the way of life and everything will be back to normal before they know it.

GIE+EXPO Came Back With A Vengeance

With impressive attendance numbers, GIE+EXPO returned in person to Louisville, Ky. at the end of October and saw an increase over attendance numbers in 2019 and 2018. The 23,922 came from all segments of the power equipment and lawn and garden industry to see…

Landscape professionals, dealers and manufacturers are excited to reconnect when GIE+EXPO 2021 returns in person to the Kentucky Exposition Center, October 20-22 in Louisville. Sponsored by the Outdoor Power Equipment Institute, Inc. (OPEI), Professional…

You have all experienced it before. You are working away in your office, simply minding your own business when there is a knock at the door. In walks one of your dependable and proven staff and they ask the question, “Can we talk?”…

Competition Between Dealers: Are There Any Lines That Can’t Be Crossed?

Although our work through the dealer association typically involves issues that impact the industry as a whole, I frequently get reminded that dealers are also competitors focused on taking action for the purpose of improving their business prospects.

Train the trainer workshops from EETC are back for 2022, with two just announced: July 12-14 and July 19-21 in North Carolina. Each workshop is limited 16 attendees, and pre-registration is…

VP Racing Fuels, Inc. has announced the promotion of Ben Dolan to Vice President of Marketing. “The VP team takes pride in having star players in every division and at every level,” says Alan…

Kohler Co. has announced that its Power Group has signed an agreement to acquire multinational Curtis Instruments, headquartered in Mount Kisco, NY. Curtis is a leading electrification…