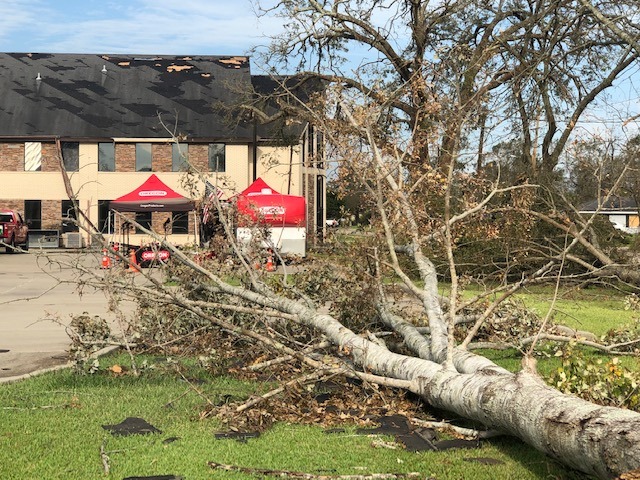 Early on August 27, Laura made landfall near peak intensity at Cameron, La. The storm was the tenth-strongest U.S. hurricane to make landfall by windspeed on record. The storm caused the deaths of at least 36 people in the U.S. (71 overall) and inflicted an estimated $10 billion in damages along the Louisiana-Texas border near the Gulf of Mexico and northward.

The Oregon Disaster Relief Team and Smiths South Central group were in Lake Charles three days after the storm hit and worked there till mid-September. According to Smiths South Central Sales Co. President Robert Smith, the high winds at the company office in far north Louisiana were nothing compared to what hit the communities in the southwest part of the state. “The storm was pretty intense, and the damage in the Lake Charles area is some the worst I’ve ever seen, and we’ve worked around these storms for years.”

Smith notes that such an effort makes for “hard work and long days” and his company is fortunate to work with such proactive suppliers. The group sharpened 200+ saws a day—more than 2,000 easily—during their time in Lake Charles. Team members made minor repairs as well. “They also made sure to spend time to tell people to use their saws safely and to be cautious,” Smith says.

And now barely three weeks later with a new hurricane—Sally—threatening the Mississippi-Alabama Gulf Coast region, Smith says strong storms are part of life in the fall along the Gulf Coast. “This year has been interesting to say the least,” he says. “Now is the time to do your best and step up and help people in need.”

Advertorial Supplied by VP Racing Fuels - Recently I met an unhappy customer at a power equipment...

Tune in to PowerET.com to see exclusive coverage GIE+EXPO seminars live! This year, back again by...

Power Equipment Trade is offering its readers an exclusive 50% discount on the registration cost...